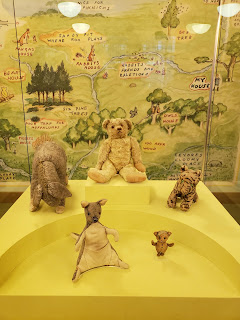 From this bunch, there were only one I hadn't seen: The Many Adventures of Winne the Pooh.  The rest I had seen at least once, although for some I was so young that I really only had vague memories and couldn't really have retold the plot in great detail. But vague or vivid, rewatching them brought me back to happier/simpler times and days... something sorely needed as we continue to navigate these uncertain times. Anyway... let's get to my quick recaps/reviews: Cinderella (1950): " Cinderelly, Cinderelly, night and day-a, Cinderelly... " I love this movie and had actually seen it on the big screen in January. It's the first Disney movie I ever saw and considering that this fairytale is probably one of the most re-told and re-imagined, Disney's version is a classic. Cinderella has a lot more spunk and wit than I remembered. And how can you not love the mice and the King and Grand Duke! Alice in Wonderland (1951): The version we had as kids had
Post a Comment
Read more

April 18, 2020
I've gotten through about a decade of Disney movies and thought it'd be a good time to share my thoughts! From this set, I was unfamiliar with most of them and so had no nostalgic feelings or memories that I feared would be crushed. Anyway... here we go: Snow White and the Seven Dwarves (1937) : For Disney's first movie, this one actually holds up. I like the songs, the Evil Queen is delightfully evil. I forgot she had a crow for a pet (and seems to set off the trend of villains always having some animal as a pet, often a bird). I also forgot that she dies by falling from a cliff. The dwarves were ridiculous and silly. Snow White was kind and compassionate, and somewhat dopey. But overall, for 1937... it's not a bad movie. It's a classic I'd share with my kids one day. Pinnochio (1940): So we all know the classic song, When You Wish Upon a Star  and I also had memories of I've Got No Strings to Hold Me Down , but other than that I didn't really
Post a Comment
Read more 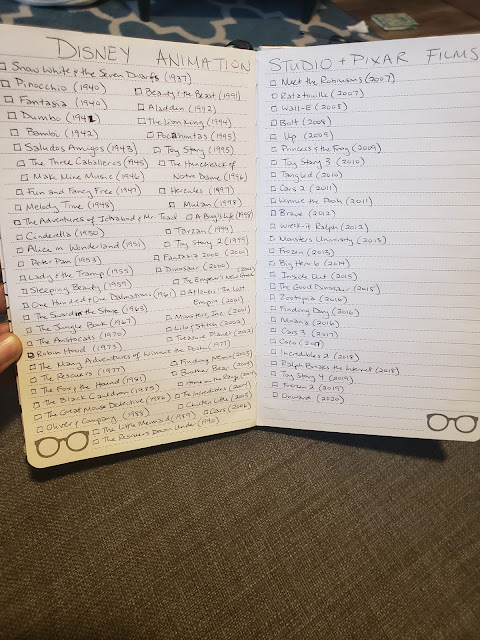 So unless you've been living under a rock, you know that the world kind of got shut down by a little virus known as COVID-19. It seemed to come out of nowhere, and one minute we were toasting to 2020 and talking about "20/20 vision" and other puns, and the next minute we're holed up in our homes social distancing. I am single and live alone. And while I am thankful to be able to work remotely and also have a well-stocked library of books to keep me company, I also needed a little bit of levity and magic injected into my life. So equipped with a friend's Disney+ password, I decided to watch all the Disney Animated Studio films. Some basic guidelines about my list and viewing choices: The movie had to be produced by Disney Animation Studios. So this did not include sequels or A Goofy Movie (which are Disney Toon Studios) nor did it include a lot of live-action or hybrid movies (like Mary Poppins and Bedknobs and Broomsticks ). I would include Pixa
Post a Comment
Read more

August 01, 2018
Hi Guys, I know I've been pretty sporadic with my blogging over the years, but I am committing to gearing back up soon! As you know, I've chosen to leave teaching to pursue a career in publishing. The transition is going to be crazy, so I'm going to pause my blog until I feel settled in my new job and new city. Thanks for your patience and support!
Post a Comment
Read more 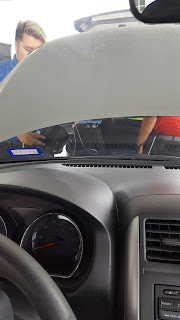 I already entered this week with a lot of anxiety, and having all sorts of sentimental nostalgic feelings because this week was my last official week in Houston. While I know I'll return to visit family and friends, I don't know if I'll be returning beyond a short-term stay ever again. So of course, I was (am) a bit of an emotional mess. But... everything seemed to conspire against me, and so far every day this week has held some disaster that has made making this transition just a *little* bit harder... Oh, and it didn't help that it rained pretty much THE. WHOLE. WEEK. #overit MONDAY:   I had my final doctor's appointment before my insurance expires (hello, unemployed life). I have been going to the same eye doctor for the last three years... didn't love her, but our school switched insurance groups a while back and the one I loved was no longer covered. But anyway... I show up to discover, once again, I'm no longer covered because we had had ano
Post a Comment
Read more

June 15, 2018
While I was in Nigeria in April, another assignment I left behind for students was for them to read three poems, and then write their own. All three poems had to do with the poets' views on being American:  "I Hear America Singing"  by Walt Whitman,  "I, Too, Sing America"  by Julia Alvarez and  "I, Too"  by Langston Hughes. I got the idea from examples of other student work online, like  this . Most of the kids resonated the most with the two "I, Too" poems and chose to write their own version representing a voice in America they feel is not often heard. Here's a few from kids who gave me theirs to publish... Response to  I, Too  by Isabela F.  I, too, sing America I know it's been said before but not in this voice. Of the Sandia and the guayaba of inglés con español Ay sí it's my turn to Oh say what I see I'm going to sing America inside me from the strellas of castaños, coahuila to the thin waist
Post a Comment
Read more

Saying Goodbye to My Favorite Home Yet... 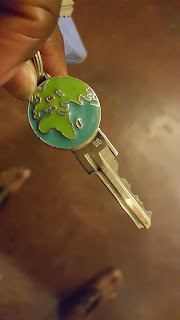 I have lived in a lot places in my life. And in my seven years in Houston, I have moved my stuff about five or six times... and now I'm doing all over again. This move is definitely the hardest. For one, I have no clue where I'll be moving to next. Everything is in storage for at least the next four months, and unlike the last two times I put stuff in storage, there is literally no plan of when or where it will all go. Secondly, this was by far my favorite place to live ever. And I realized I didn't take enough pictures, or invite enough people over. And... I'm scared that I'll never be able to create such a cozy and happy home again. When I moved in, my landlord made me a special key when I moved in because when we talked about the place I told him I loved to travel and that I taught World Cultures. It was the sweetest, and he and his wife have been awesome landlords these past few years. A friend helped me mount the top bookshelf (which I'm
Post a Comment
Read more
More posts

Hi! My name is Bunmi Ishola. I love to read, write, travel and documenting life through pictures. And as a Christian, each day is a step of faith in which I hope to know God's love more and love others well.

I started this blog in 2010, when I found myself unemployed and with no prospects for a new job. I began chronicling my journey through the job hunt, finding a new job, and everything that has come since. It's a simple life, but I am thankful for it, and I hope you feel inspired by whatever you read here!